I've known about these for sometime but wasn't overly concerned about completing the set and thought I'd find one here or there. Haitai, who used to have their own team in the KBO, the Haitai Tigers, who became the Kia Tigers in 2002, released a set of mini cards in the Homerun Ball chocolate snack treats starting in 2006. After speaking with a fellow Lee Seung-yuop collector, there appears to be 23 cards in the set (22 in image). I currently own five of them. 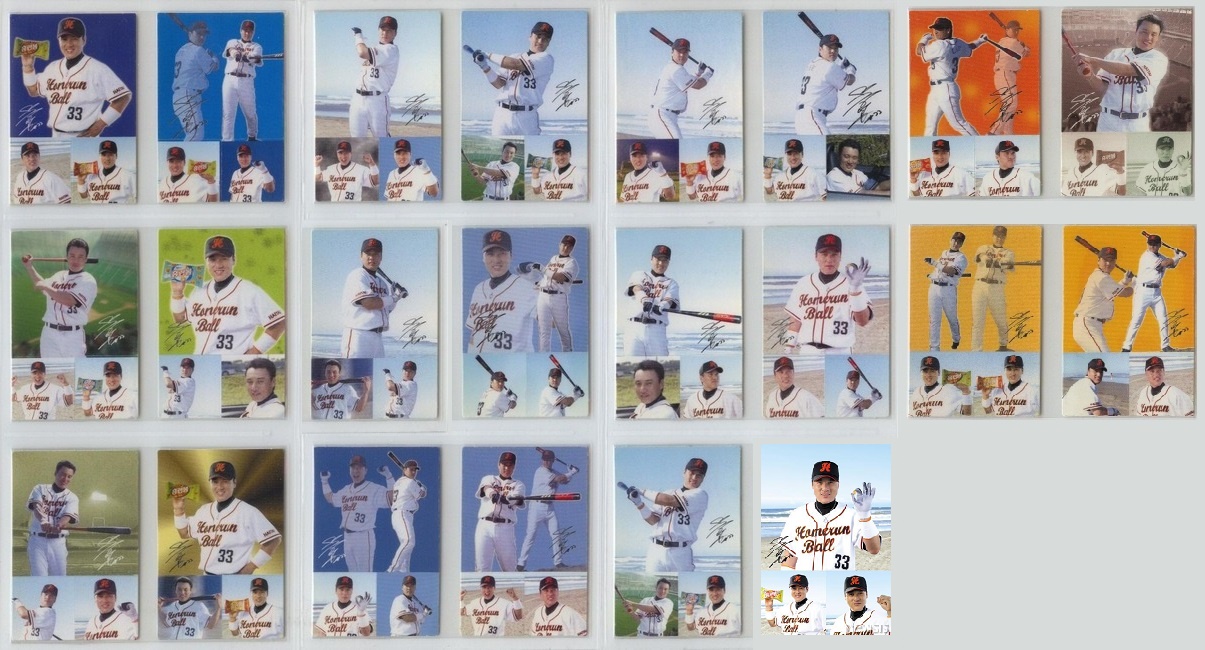 Not sure if anyone has heard or read about this topic from me before, but I found a Korean blog that has more ads and a brief summary from the Korean blogger about the Haitai Homerun Balls. I couldn't post asking questions because I'm not a member of that blogging site. The reason I am posting is because he mentions Calbee in his blog but I am not sure if he thinks they released them. I know Calbee, a Japanese confectionary, has released food-issued trading cards for a long time. I want to break down the commerical and ads I have seen. I would not have doubted that Calbee may have released these in Japan but I spoke with a Japanese friend who told me he never saw them for sale in Japan and that it was indeed a Korean-only product, as I suspected.

COMMERCIAL: First, in the commercial you will see Lee Seung-yuop driving a car while seated in the right seat, which would make this recorded in Japan, not Korea. Secondly, the Haitai Homerun Ball jersey he is wearing is in the colors of the Yomiuri Giants (Tokyo). Thirdly, the blog states the commercial aired in 2006 while the YouTube video information specifically stated it aired on Sept 9, 2006. The jersey he is wearing in the commercial is #33, which he wore in his first of five years with Yomiuri in 2006 but changed to #25 in 2007-2010. Lastly, all of the snack packaging (Haitai) and commericial writing is in Korean. There was no mention of Calbee in the commercial.

I submitted the five mini cards that I own to PSA but they were N9'd (unable to identify) this week. I will have to be more diligent about giving them the info I have. Also, next time I will attempt to call them 2006 Haitai Homerun Ball, which sounds better, than 2006 Haitai Confectionery as I had listed on the online submission form.